Accelerated network performance is achieved through special technologies. This is realized differently in the Beryllium and Boron releases.

SmartNics is a network adapter that is able to accelerate functionality and offload it from hardware (server CPU). The virtio driver is a generic network driver supported by the majority of Linux and Windows operating systems. It enables network layer abstraction by ensuring that generic virtio driver requests are translated (via virtio adapter) to NIC specific software requests. This allows full detachment from the cloud infrastructure and allows the VM operating system to be hardware (NIC) independent.

These technologies have a number of benefits:

With SmartNIC, Pan-Net supports any type of application or service from moderate to very high networking requirements, such as Telco-grade VNF’s. The architecture of SmartNIC is shown in Figure 1. 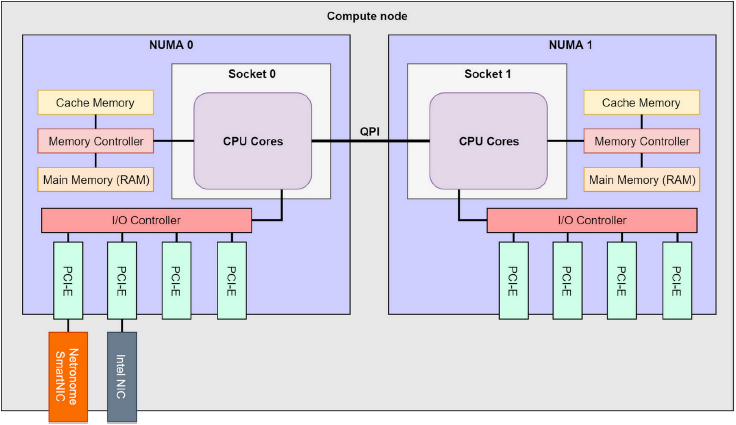 SmartNics with XVIO can provide almost the same networking performance across all NUMA nodes of the compute. Therefore, it is not (stringently) required to target the application placement in the same NUMA node as the SmartNic (Numa 0). It is important to note that placement in NUMA 1 can lead to a loss of networking performance (pps) of a few percent as illustrated in Figure 2.

In the Boron release, network acceleration is based on:

We have two types of the compute nodes: Intel CPU based dual socket and AMD EPYC2 CPU based single socket. The following NIC models and NUMA placement are available for the legacy SR-IOV mode:

Huge pages is a technology used for efficient memory management. It enables processes operating on larger blocks of data between the memory access times, since it decreases the amount of memory address mapping. This needs to be configured in the Linux kernel, and is available for flavors of performance type (having dedicated resources).

The standard memory block (or page) size in Linux virtual memory management is 4K, whereas Huge pages allow up to 1GB blocks.

Any on-boarded application and its VMs can by default get:

After network acceleration has been enabled, the customer simply creates VMs of performance type on the SR-IOV port type. Standard and accelerated compute node configurations are shown in Table 1.