Creation of a virtual machine (VM), also interchangeably called server (in OpenStack CLI) or instance (in Horizon), is the first step in setting up a Pan-Net cloud-based service where the basic steps are described in Quick Start . In this section, we will describe some options related to creation and management of VMs.

A server can be created from images, volumes or snapshots. The document Quick Start describes how to create a server from an existing image.

Note that the OpenStack server create command takes optional arguments in addition to the ones discussed in this chapter. Please see the OpenStack documentation for the full API details. A server can be created from different sources, which is described next.

The Pan-Net portal allows the user to choose between a number of pre-built public images. In many situations, however, you may rather wish to create an instance from a custom image. More details on how to create and upload a custom image is described in how-to Manage images

Figure 1 shows the dependence between different resource types which therefore indicates the workflow of creating a virtual machine. 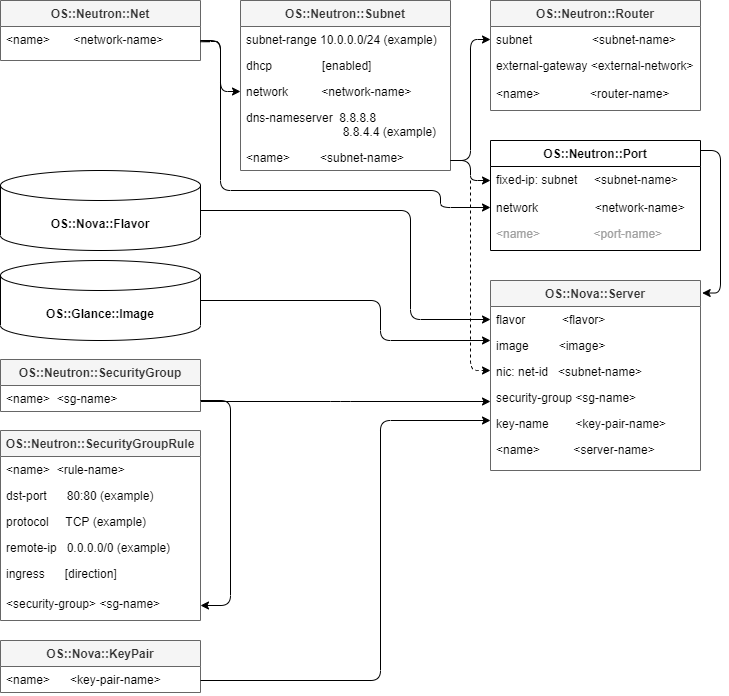 From an uploaded custom image, you can create a server directly, just like from a public image. The OpenStack command is

To obtain lists of available object identities, run in turn

The two first arguments determine the configuration and build source of the instance, and the following three define the minimum networking and access requirement for the remote connection. Note that for these objects, their names can be used in place of their identities in the OpenStack commands. The mandatory last argument <name> is a chosen name for the server.

To create a server from a volume (block storage), the volume has to be created from an image, which makes it bootable, see https://pannet.atlassian.net/l/c/cGX4mD1t

Create an instance from the bootable volume by

The only difference in command syntax is that the source argument is changed from image to volume. An advantage of creating an instance from a volume is that the volume is not deleted when the instance is deleted.

A snapshot is an image created from a running instance. Snapshots have two important use cases:

OpenStack relies on QEMU to manage and provide synchronization with running instances, allowing certain actions before taking a snapshot. This synchronization is enabled when the image has the property hw_qemu_guest_agent set to yes.

On a previously created private image, you can set the properties using the command

The properties of a snapshot or image can be printed by

The availability zone can be passed as an argument when the virtual machine is created. Assigning servers to different availability zones ensures a certain level of geographical redundancy. This has to be done at creation time using the argument --availability-zone <zone>, where <zone> is az1, az2 or az3.

The deployment of identical servers can be facilitated with a Heat orchestration template (HOT). For a plain server, the template is simple, and contains only a single resource under resources, with its arguments listed under properties. Here, Heat references existing network, key pair and security group in the tenant.

Heat templates are written in YAML (or JSON) format. The supported functions and syntax are dependent on the template version. The following simple template for VM deployment specifies its resource type and properties, that correspond to OpenStack CLI arguments.

After saving the HOT with the property parameters filled in as, say, create_server.yaml, it is used with the command (from the same directory where the template was saved)

Default parameter values specified in the template can be overwritten in the creation command with the argument --parameter, for example,

The argument is given in quotation marks and multiple parameters are separated with semi-colon.

At any time, the status of the deployment can be inspected with

The OpenStack CLI provides some details related to the cause of failure in the creation report, which is printed with

A stack is deleted with

More details on using Heat can be found in https://pannet.atlassian.net/l/c/KAAq7urt

After a virtual machine has been created, it can be managed through Horizon or CLI commands. The operations include

The instance run states are illustrated in Figure 2. Each node represents a state and the edges denote the commands used to make it enter into the respective state. 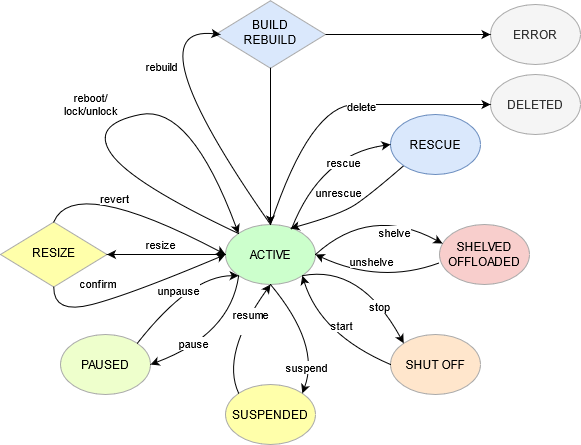 Association of floating IP addresses and managing interfaces and volumes are described in other parts of this documentation.

Through Horizon, many of the possible operations on instance are available (Figure 3). Under Edit Instance and Edit Security Groups it is possible to change the instance name and add or remove security groups. Labels can be added under Update Metadata. There are two types of data: Glance Metadata Catalog or user defined data, that can be added using the Custom option. The server management actions from the OpenStack client are described below. Some of the optional arguments to the commands have been omitted.

where --property <key=value> is the data to be to added or changed for the server with identifier <server>. The command accepts multiple properties by repeating the argument.

A special syntax exists for the server name

A property is removed from the data set by

An instance can be paused, where its state is stored in RAM and it continues to run in a “frozen” state, by

An instance can be suspended, where its VM state and memory are written to disk, and the VM is stopped. Similar to hibernation, its memory and vCPU become available for other tasks or new instances. This state can be used to free up resources or to perform maintenance. This is done by

An instance that will not be needed for some time can be shelved, or temporarily removed from the hypervisors. This state can be used to free up resources. This is done by

An instance can be locked by administrators to prevent other users to perform administration actions on it (such as the actions listed in this section). This is done by

which can also take multiple server identifiers. A complete list of actions prevented on a locked instance can be found at OpenStack Server concepts.

It is possible resize an instance by changing its flavor. After resizing, the instance needs to be rebuilt and restarted.

The operation has two steps: creating a new server based on a different flavor and copying the disk contents into the new server. This is done by two commands: resize followed by either confirm or revert.

The resizing is initiated by

where <flavor> is the new flavor ID and <server> the instance name or ID. The command gives the guest operating system a chance to perform a controlled shutdown before the instance is powered off and resized.

This process can take some time, during which the instance is in status resize. After resizing it will be in status verify_resize until the resizing has been confirmed (or reverted), which is done by

After confirmation, the instance enters into status active.

In case the resizing fails or does not work as expected, it can be reverted by

Again, the instance in the old flavor enters into status active.

A server reboot is performed by the command

The argument --hard performs a reboot equivalent to unplugging the power from a physical server and plugging it back in before rebooting. During the process the instance is in the status hard_reboot.

The argument --soft performs a reboot by sending a reboot signal to the operating system to shut down all processes gracefully. If the reboot type argument is omitted, this is the default reboot type. During the process the instance is in the status reboot.

With the argument --wait, OpenStack waits for the reboot to complete before accepting any further commands. The server identifier <server> can be name or ID.

Rebuilding an instance removes all data on the server and places it with the specified image. The server ID, flavor and associated IP addresses remain unchanged. This is done with

where <image> and <server> are the image and server identifiers (name or ID).

An instance is powered on by the command

and is shut down by

with <server> being the server identifier (name or ID). The stop command is equivalent to powering down the server from the operation system, for example by the command shutdown -h. When the OpenStack Compute manager detects that the VM has been powered down, it changes the server status to shutoff.

deletes an instance with <server> being the server name or ID. The server should first be powered off and all its associated resources detached before deleting it.

In Ubuntu from version 18.04 LTS, Netplan is used for network configuration. Netplan is based on YAML, and the network data is simply added as text to a configuration file in YAML format. The file can be opened and edited with a text editor like vi or Nano, which both are available in the Ubuntu distribution.

To modify the configuration file, change into that directory with the command

In that directory, there is likely only the single automatically generated file

You can create a new file or edit this default file. Should you decide to edit the existing file, it is good practice to make a copy with the command

First, find the name of the active network interfaces that you want to configure. The interfaces are listed with

Note the interface name that you want to configure as it must be specified in the YAML file. To open the file with nano, enter

The YAML file is sensitive to correct indentation (using spaces, not tabs) and has the format

In this case, using DHCP and the two DNS servers, the file should look like in Figure 4.

Before applying the change, we can test the configuration by the command

This will validate the configuration before applying it. If the test succeeds, the command output looks like in Figure 5, where you can accept the changes by pressing <ENTER> before the timer expires.

Should the new configuration file fail, Netplan will automatically revert to the previous working configuration.

Having more than one interface, you can create separate YAML files for each interface and naming them with a sequential prefix, like 02-netcfg.yaml and so on. Netplan applies the configuration after the prefix, so the 01 file will be applied before the 02 file.

Setting the locale and time zone

To avoid annoying error messages during later installation or configuration steps, it is a good idea to set the locale as a part of the server preparation. This is done in the two steps

The second command opens a dialog with language and locale options. The dialog in Ubuntu does not allow any menu selections directly, but installs the packages listed in the files under /var/lib/locales/supported.d/. As recommended, UTF-8 encoded language support should be selected. On the second menu, the first choice is the generic locale C.UTF-8 (where C denotes “computer”). The default settings are usually acceptable, and these are installed after selecting <OK> twice.

The time zone on the server is managed by the utility

which without arguments prints the current date, time and time zone settings. To find a suitable time zone, list the options with

and set the time zone with (for example)