A proxy server acts as a gateway to external networks for instances without a public IP address. When a proxy server is used as a single internet access point, traffic can be controlled efficiently, which enhances security and protects back-end servers from intrusions and attacks.

There are different ways to provide an instance with internet access: through a floating IP, a virtual IP or a proxy server. The latter has the advantage of being the most consistent and secure method, and the only solution in situations where a floating IP cannot be used.

Two additional utilities are useful for testing of a modified configuration: netstat (in the APT installation package net-tools) and squidclient:

The proxy server starts automatically after installation, which can be verified with

To set the Squid service to start automatically whenever the server starts, do

Squid uses access control lists (ACL) to filter out source IP addresses and ports from which requests will be allowed. The order of ACL declarations acl are important. This, together with the http_access rules and http_port directives, define the basic access control.

The Squid configuration file /etc/squid/squid.conf is a long text file, but only a few declarations are needed for a basic proxy server. By default, Squid denies all external requests, and trusted hosts have to be explicitly declared as allowed.

Make a copy of the file before editing with
sudo cp /etc/squid/squid.conf{,.bak}

The acl directive is used to define IP ranges (as localnet) from which requests are accepted and ports allowed for outgoing connections (Figure 1): 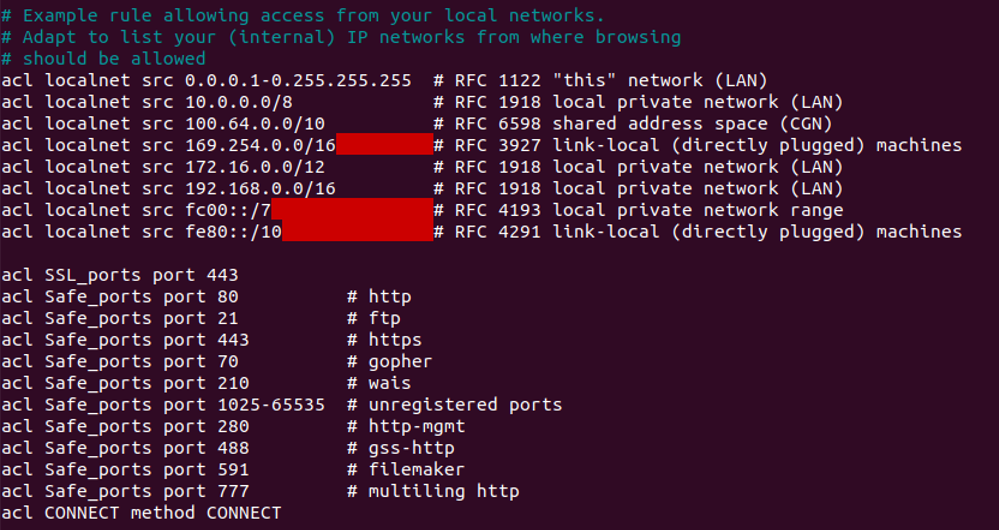 The http_port defines the port (and optionally, the source IP) the proxy should listen to. The default is port 3128 given in the directive

Squid can be instructed to listen to multiple ports by adding http_port lines. The directive can also be used to to specify IP addresses Squid should listen to. When the proxy has an external and an local interface, it should probably only accept requests from the local network. Squid can be restricted to listen only on an private IP address (the address of the remote server) by placing it in front of the port number, for example

Alternatively, a list of allowed IP addresses can be put in a separate file, say /etc/squid/allowed_ips.txt, with the following structure:

The ACL directive to use this file is

Custom access controls (such as http_access allow allowed_ips) should usually be placed between the port declarations and the deny all.

Warning: do NOT add port 25 to Safe_ports, as this can be a severe security risk.

The netstat command is used to display details about network connections and protocol-specific networking statistics. The command

shows TCP connections - specifically the IP addresses and ports that the Squid is listening to (Figure 2).

Figure 2. The netstat command shows connections Squid is listening to.

The utility squidclient takes a URL and can be used similarly to curl to test HTTP connectivity, with the option to specify the source IP address and port to verify the Squid configuration. The switches -h and -p are used to modify the IP address and the port of the incoming request. Figure 3 shows a request from an unauthorized and an authorized IP address.

The proxy server has to have a security group which allows requests from remote servers, that is, TCP on the the subnet IP range.

If uncomplicated firewall UFW is enabled on the proxy server, its Squid profile needs to be enabled with

The more informative of the two is access.log, which shows all sites accessed through the proxy. Note that the log files must be accessed as superuser (with sudo).

The access log contains, in addition to the accessed site URLs, a result code indicating how Squid handled a request (Figure 4). See Table 1 for some common result codes.

Utilities on the remote server have to be configured to use the proxy server for external access. Note that this access is protocol-specific, so the ping utility cannot be used to test connectivity in general. HTTP connectivity can easily be tested with curl, which shows the HTML source code (Figure 5).

Provided that the proxy server is configured to accept requests from the remote server, and its security group and firewall are set accordingly, internet access through the proxy from a terminal console is enabled by setting the environment variable

(when no password authentication is used). Here, <proxy-ip> is the private IP address of the proxy server, and <proxy-port> the port it is listening to (number 3128 by default).

To make variables persistent (loading at every new terminal session), the same lines are added to the .bashrc script, as shown in Figure 6. 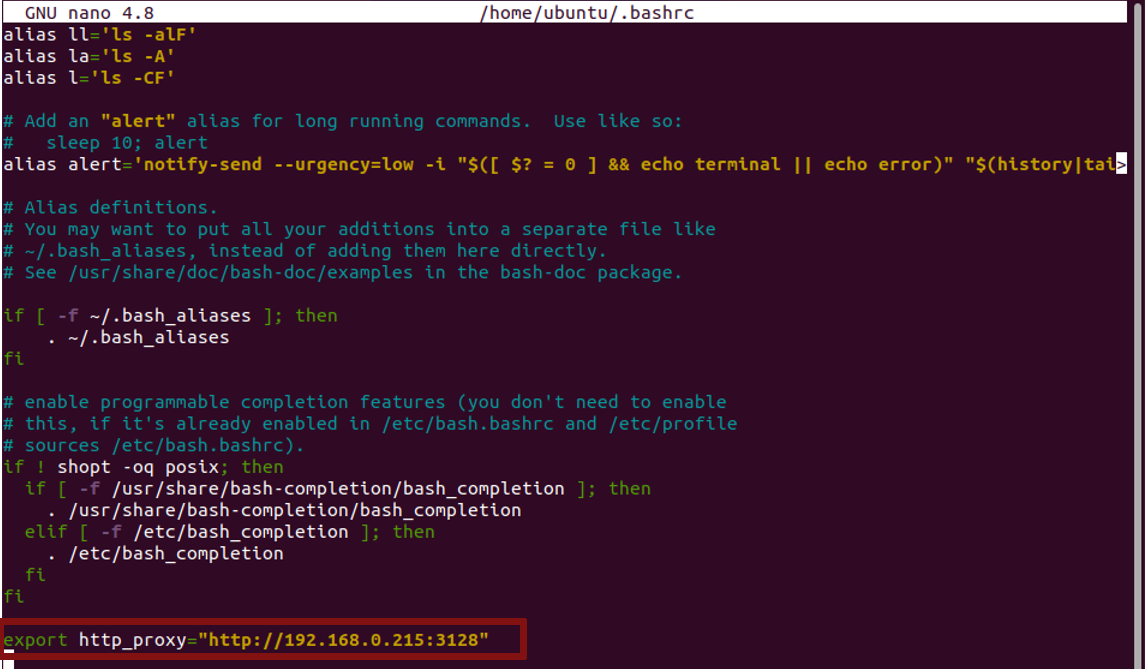 For SSL connections (encrypted data) between the remote and the proxy, the variable

is used. This variable is usually not needed: both http_proxy and https_proxy support proxy connections for either HTTP or HTTPS requests, and encryption is in general not required on the local network.

Other services supported by Squid are declared similarly, such as

Create a file proxy.conf for the APT proxy settings with

and add the line (when no password authentication is used)

The alternative format shown in Figure 7 can also be used

It is vital to strengthen the security of the proxy server adequately. For some recommendations, some of which are applicable to HTTP as well, see https://pannet.atlassian.net/wiki/spaces/DocEng/pages/1428914372/Bastion+host#Security-best-practices