Load balancing is used to avoid server overloading and efficiently delivering web services from a multi-server architecture. It helps ensure scalability and availability of services. Deployment options and differences between the Beryllium and Boron LBaaS implementations are described in this chapter.

A Layer-3 load balancer uses only the source and destination IP addresses from the packet header for routing decisions. In ECMP, routing is controlled by flow-related functions in addition to information included in the of the packet header.

Layer-4 load balancers operate at the transport level. The routing decisions are based on the TCP or UDP ports that packets use along with their source and destination IP addresses. L4 load balancers perform network address translation but do not inspect the actual contents of each packet in general.

L4 load balancers simply forward network packets to and from the upstream server without inspecting the content of the packets. They can make limited routing decisions by inspecting the first few packets in the TCP stream.

A Layer-7 load balancer operates at the application layer, which means that the actual content of each message can affect the routing. This typically applies to HTTP traffic.

A Layer 7 load balancer terminates the network traffic and inspects the message in a packet. It then sets up a new TCP connection to the selected back-end server based on the message content, the URL or a cookie and forwards the request.

A load balancer needs an algorithm to determine how requests are distributed across the server farm. There are many different ways to do this - from very simple ones to sophisticated algorithms taking server performance indicators and other information into account.

A router-based load balancing function would try to spread the traffic evenly over multiple paths. To achieve this, ECMP can be used. However, using plain ECMP causes lack of symmetry and stickiness.

For every forward flow, the reverse flow must follow the same path. This is necessary because many services are stateful and need to capture both directions of the flow. However, the normal ECMP hash function is not symmetric. Symmetry is achieved by using a special flow table for this purpose.

Once a flow has been assigned to a particular path, it should follow that path for the entire duration of the flow. This is known as stickiness. If the flow is moved to a different path in the middle of the flow, the service will typically fail. When a new resource is added, hashing typically leads to most flows being moved to another path. This problem can also be completely eliminated by using the flow table.

In a Contrail vRouter, the hypervisor is using Equal Cost Multi Path (ECMP), which assigns flows to paths based on a hash function taking as argument source and destination IP addresses, ports and protocol, supported by an interface-route table.

LBaaS is a Contrail feature offered by Pan-Net as an optional service. It is characterized by

The LBaaS implementation in Boron is based on Octavia. It consists of a number of resource types in the architecture shown in Figure 1. 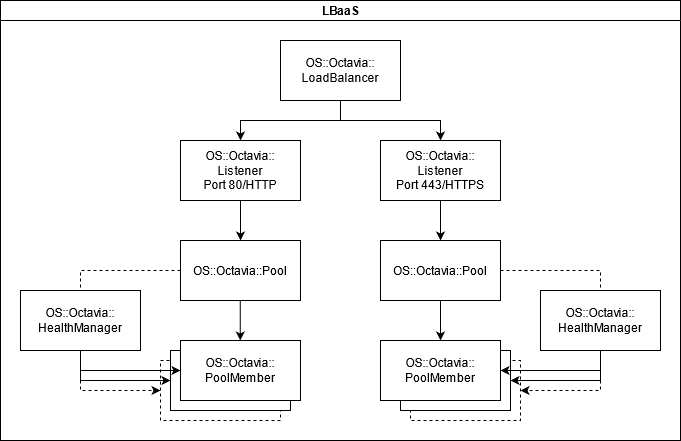 Briefly, the main components and terminology are the following:

This LBaaS is available as self-service. For deployment details, please see Configure LBaaS

In Boron, a LBaaS product supporting ECMP is also available. It is based on BGPaaS for route management. For deployment of this load balancer, please contact Technical Support